Price based aspects of competition, have traditionally dominated the discourse on competition. With the advent of digital markets, and the consequent significance of non-price-based characteristics however, this discourse becomes ineffective for economic regulators. Data and privacy have become crucial elements of competition law jurisprudence, globally and abroad, affecting the discourse on antitrust. The digital economy and big tech have thus fuelled a relook into the entire notion of dominance- the process, drivers, and its abuse.

Abuse of Dominance: Complexities in The Indian Context

The Competition Commission of India (CCI) made pertinent observations in two important reports- Market Study Report on the Telecom Sector in India, and the Market Study on e-commerce in India. In the former, it highlighted the need for competition analysis to examine the extent of ‘free consent’ by consumers in the era of data aggregation, while also pointing out the entrenchment of dominance by a player offering multiple digital products. In the latter, it pointed out issues of aggregate data masking by the platform, to the detriment of vendors on the platform. 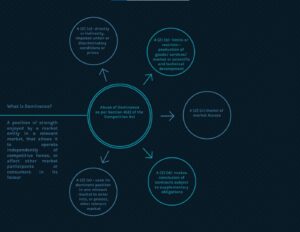 Abuse of dominance, dealt with Section 4 of the Competition Act, is a tricky proposition in the digital economy. In Competition Act, 2002, the consideration of ‘factors’ to establish dominance (Section 19(4)) and the delineation of relevant product markets (Section 19 (6)) is an onerous task; one that involves not just specific online markets, but possibly, its parallels with the offline market. Additionally, difficulties in conceiving a consistent link between data and antitrust, have made it complex to analyze dominance, and its abuse.

Thus, while arriving at an ex-ante framework may hinder an evolving sector, a few phenomena merit consideration, that could shape a ‘principles-based’ approach. The following sections explain 3 such phenomena- the first mover advantage, network effect, and neutrality-that hold the potential to better shape the discourse on dominance.

The ‘first mover advantage’ is an oft mentioned phrase in the rise of big tech in the digital economy, and is crucial in the Indian context. Section 4(1), while prohibiting abuse of dominance, doesn’t delve into the nuances of ‘dominance’ as a phenomenon, or a process. The early collection, and housing of an immense volume of data by the likes of big tech platforms, while justified from a business perspective, must be juxtaposed with the disadvantages it poses for smaller market competitors or newer entrants, whose business models depend on data, especially those around AI. Additionally, historic concentration of data by virtue of first mover advantage may result in reduced dispersion of knowledge.

Consequently, the Competition Commission of India has to carefully craft the jurisprudence around dominance, especially around the interpretation of ‘practice resulting in denial of market access’ in Section 4(2)(c). While market concentration due to data gathering should form an important consideration, it must be seen in light of consumer welfare, and if such collection practices were lawful, proportional, and granted the user ‘free consent.’ Complementary to market concentration, the ‘first mover advantage’ must also be seen in light of high entry barriers for potential competitors. Such barriers could be of detriment to innovation in newer technologies (under Section 4(2)(b)(i)), or prevent companies from scaling up and competing with bigger players.

The debate around the role of interoperability and data portability in addressing competition concerns, must be noted here. Proponents have pointed out the possibility of reduced ‘lock in’ effects, and lowering of ‘switching costs’ due to interoperability and portability of data. This would, on paper, allow for smaller competitors to scale up, woo more users, and consequently create more equitable competition. Examples such as the Data Transfer Project, allow users to have more control over data, and choose who they want to store it with, or share. The pro and anti-competitive effects of creating a data sharing regime (as part of a consent based mechanism, or through provisions in the Revised Report of Committee of Experts on NPD) is another test for the CCI, setting the narrative for ‘level playing field’ in the digital economy.

The other aspect is that of ‘Network Effect.’ It refers to a value of a product or service being dependent on the number of people using that product or service, with a larger number of users translating into a larger value. The Competition Commission of India’s investigation into the WhatsApp Pay case, brings to light two possible anti-competitive incentives for dominant firms- first being tying in additional products, and second, using the network effect to enter and protect position in a new market. CCI didn’t find WhatsApp Pay to be in contravention of Sections 4(2)(d) and 4(2)(e), while firmly delineating the markets for OTT messaging platforms and UPI Payment Services. However, it in its prima facie order in the WhatsApp Privacy Policy case, CCI made certain pertinent observations that did hint at these two incentives.

CCI observed that “cross-linking and integration of user data can further strengthen data advantage”, echoing its observations from the Market Study on Telecom Sector. The possibility of data sharing mechanisms between WhatsApp and its parent company Facebook, could lend an unfair advantage to Facebook in the online display advertising market. While this is built on a direct contractual relationship between Facebook and WhatsApp, it doesn’t stray far from the idea that multiple digital products offered by an application (especially dominant applications), seek to leverage the power of indirect network effects. While direct network effects increase the demand for complementary products, indirect network effects are less explored. These do not rule out the effects that may arise when distinct digital products (aiming for distinct markets) are seamlessly integrated, only separated by a thread of ‘user choice.’ This especially so, after CCI having established the dominance of WhatsApp in the messaging space, and WhatsApp Pay being a distinct, but value-added part of the WhatsApp ecosystem.

Platforms, by virtue of their nature, collect large amounts of data pertaining to location, products, vendors, consumer preferences, which is a lucrative aggregate dataset. The recent allegation of NRAI against food delivery platforms, is that platforms engage in data masking, and do not make available the complete data required for better operations. The issue of platform neutrality was also dealt with in the case of Google, where the CCI deemed it to have abused its dominant position of a search engine. It was found guilty of search bias, that is, manipulating the search algorithm to suppress results of competition and unfairly promoting its own services across shopping, news, video searches etc.

What must be remembered is that the lack of neutrality is not an issue per se, when put in the context of the evolution of platforms. The French Digital Council has noted this, observing the change in role from mere access to service (listing, matching etc.) to competing with clients. Platforms introducing own downstream businesses, from having own labels for products, to exclusive logistics, is a step towards greater business value capture in a competitive market. This form of vertical integration may actually be seen as beneficial, seeing that greater supply chain efficiencies may translate to lower prices for the consumer.

The issue becomes pronounced when the platform, as in the case of Google, is found to be dominant. Lack of neutrality here may be understood as either backtracking on transparency and disclosure, or engaging in discriminatory practices, in favour of own, or ‘preferred’ businesses. Masking of data, apart from manipulation, or withholding it, has the potential to create two levels of dominance. On the first, it cements the position of the platform vis-à-vis other platforms offering similar services. In the second level, this dominance may be transferred downstream- with platforms using the advantage of housing such large aggregate data to introduce their own labels, and products, or favour ‘related parties.’ These entities in turn, may engage in competitive pricing, and preferential ranking.

Dominance is a complex and sensitive complex to dissect, and the digital economy calls for a more carefully designed approach to establish any abuse of such dominance. Care must be taken to acknowledge the peculiarities, innovation, and scale of commerce enabled by platforms, while delving into what constitutes ‘abuse’, and creating a ‘level playing field.’

A static view on dominance may pose the danger of perceiving all major digital entities through a parochial lens. Gouri highlights this, albeit in the context of Standard Essential Patents, that dominance must be seen in the light of ‘competitive restraints.’ This basically points out to the constant nature of disruption and the temporary nature of ‘dominance’ in the digital economy. Moreover, incorporation of a ‘rule of reason’ perspective, as required in vertical agreements, would go a long way in examining issues of ‘neutrality’.

Finally, while there is no single panacea to address complexities, there is a need for a well-designed coordination mechanism between the CCI and the proposed Data Protection Authority. Both are sector agnostic and cross cutting market regulators, who would contribute to better understanding of dominance- from lawfulness of data collection practices, to market creation and delineation.