Home /Resources/CCI and ‘Big-data’: Tinkering Box for the Major Digital Players in the Indian Economy

CCI and ‘Big-data’: Tinkering Box for the Major Digital Players in the Indian Economy

Competition Commission of India (CCI) in its majority order dated 8th February 2018 held Google Inc. in violation of Section 4 of the Competition Act 2002 (now referred as “Act”). It found contravention at three places and levied a penalty of 135 crore rupees on the said party. It also passed a ‘cease and desist’ order to the same extent.

Facts of the case were that the informant, i.e. Consim Info Private Limited, alleged Google (now referred as the ‘Opposite Party’) is running its core business of search and advertising in a discriminatory manner, thereby causing harm to the advertisers and end-consumers. It submitted that Google is facing ‘conflict of interest’ in its horizontal and vertical products, and there is manipulation of results to provide advantage to its vertical partners like YouTube, Gmail and Google Maps.

The Director General (DG), majority, as well as minority opinion paid due reliance on data-driven approach whenever it came to decision-making in the order [Para 23, 187]. In fact the minority opinion, while disagreeing with the majority, took the defence of unavailability of data and survey-driven approach when it was about finding violation of the law [Para 11, minority order]. In the same regard, the researcher conducted his own survey on how end-users perceive Google Incorporation. Out of 64 people who responded, more than 90 per cent responded that if there is conflict between the services provided by Google, they would choose its ‘search results’ over and above anything else. 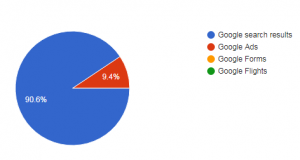 For the uninitiated, google offers search results under three heads, i.e. ‘Advertisement’, ‘Sponsored’ and ‘organic search results’. Now as much as the first two categories are important for the said company to generate revenue, it is the third one which is the most important and non-negotiable for the end-users as per the said survey. Any tinkering with these results would have the potential to mislead the consumers, thereby alarming the competition watchdog present in the relevant country. A more fundamental question which can be raised is, what is the requirement to operate under two heads, i.e. ‘Advertisement’ and ‘Sponsored’, when aim of both the categories is similar, i.e. to generate revenue by capitalizing the real estate Google has generated for itself in form of users’ attention? This question becomes more pronounced in the light of stance taken by the minority order, where they have brought the ‘intelligence’ of consumers in question. The order while negating the majority order reads as “…it is also a presumption that the consumers are not sufficiently intelligent to distinguish an enhanced ad format from a free search result…”. The minority order didn’t realize that while assailing the presumption made by the majority order, i.e. lack of consumer intelligence, it in itself made one, i.e. presence of intelligence.

Apart from the ‘conflict of interest’, there were other questions of law raised in the said case. One was related to absence of economic relation between the end-user and the company, as the search results provided by the search engine were free of cost [Para 58], and therefore it being out of the ambit of the CCI. Even though the majority order was able to give a successful rebuttal to the same, the line of reasoning adopted by the opposite party might find space in future case laws. Google’s Adwords policy on the trademarked words also has a potential to be interpreted in a different manner as the stances taken by the DG and majority order were substantially different.

The DG found the violation at more than five instances, however the majority was able to agree only with three. Therefore there is a chance that the Appellate Tribunal (AT) while relooking the case might find more contraventions. This becomes important when read with the decision of majority where it was unable to find violation in Google’s agreement with Safari and Mozilla having Google as the default search engine. But this should also not take the reader away from the minority order, where the two members were unable to find even single contravention. This too has high chance of influencing AT’s decision making.

As on date, the majority order holds. If the AT, and later on Supreme Court, sticks to the stand, it would have major policy implications. The first one is the observation made by the commission on ‘big-data’ [Para 86]. The CCI has said in clear terms that users’ attention qualifies to be ‘real-estate’ and a firm can use it to generate money by selling advertisements [Para 248]. This approach is unique in its sense as it is for the first time that an Indian regulatory body has looked into how advertisements are displayed, and its impact on the viewer. Even though it is restricted to the online market in this case, one may foresee the commission venturing into offline market as well.

Another concern is the ‘cost’ of justice. The said case was registered somewhere in 2012 and it took the commission approximately six years to decide the same. Even the DG investigation was ordered in June 2012 and the same was completed in March 2015. This goes against the crux of the Supreme Court ruling in CCI Vs. SAIL case, where it decided DG investigation report be submitted within 45 days of the order, and the case be disposed in speedy and expeditious manner. The said ruling after six years also has limited effect when the AT has admitted the appeal on deposition of 10 per cent of the penalty, thereby granting a de-facto waiver of 90 per cent to the opposite party.

The standard of penalty adopted by the Commission to levy penalty in this case also requires reconsideration. Even though the majority order held Google in violation at three places, CCI puts a fine of five per cent of average turnover for last three years (totaling around 135 crore rupees). It would be reasonable to call the said penalty mediocre given that the spectrum allotted to the commission in the Act is from zero to ten per cent of the turnover. The problem with such standard is that the figures quoted by Google when asked to divulge the sales turnover, were only the ‘direct’ ones. It tried to play around commission by using the ‘indirect’ terminology. The said issue gains more weight when CCI takes serious note of such omission. It expressed its dismay over the same, but felt short of increasing the penalty. Established precedent would suggest that such hiding of figures would surely qualify as an aggravating circumstance for the opposite party.

The future of the said case is interesting and worth close observation. Currently it is heard by the National Company Law Appellate Tribunal (NCLAT) where the opposite party has preferred an appeal, and is likely to go to the top court irrespective of the result in the NCLAT. The stakes involved at both the sides are huge, and from the policy perspective it remains to be seen how other regulatory bodies interpret the concept of ‘big data’. Given that the Indian government has made renewed efforts to woo foreign investments in the service sector, thereby leading to inevitable growth of big-data players, it would not be a far-fetched thought to imagine other digital players inviting scrutiny of the competition watchdog in future.